Guy Burt
This is the third episode in the first season of Alex Rider.

Alex is thrown into the unfamiliar world of the ultra-rich as he struggles to perfect his cover identity, but risks alienating his best friend Tom by keeping the mission a secret.

At MI6, Mrs. Jones tells Alan Blunt that Eva Stellenbosch, the Dean at Point Blanc, would like to meet Alex before accepting him into their school. Alex returns to his own school where Tom notices the wound on his head and begins to get suspicious. Upon returning home, Mrs. Jones explains to Alex that he has to spend the weekend at a mansion of the two people he is to claim to be his parents. Prior to being sent to the mansion, Smithers provides him with the gear in order to secretly contact MI6. He meets with his fake parents, David and Lucy Friend, who do not approve that they are involved in this, but go along with it; they tell Alex not to trust Alan Blunt. Later their daughter, Fiona, arrives at the mansion after breaking up with her boyfriend Rafe. Tom believes that Alex is lying about his whereabouts, and heads to Alex's to find out the truth, where Jack tells him where Alex really is. Tom travels to the Friend mansion to confront Alex about not telling him he is a spy. When Tom leaves, Rafe and his friends turn up to reunite with Fiona, and they invite Alex out for shooting. The next day, as Alex is waiting in the woods, Rafe, Fiona and their friends begin shooting at Alex, but Alex gets the upper hand. Alex returns to the mansion just as Eva arrives. The interview goes off without any issues, though Fiona, angry from her encounter with Alex, tries to blow Alex's cover but is sedated by an undercover maid. Alex then leaves for Point Blanc and arrives at the school in the French mountains. Meanwhile, Tom begins to put together a documentary on Alex being a spy. 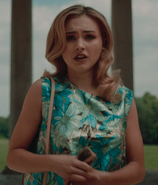 Fiona reveals all her family's secrets to Alex

Alex turns the hunt inside out