Guy Burt
This is the second episode in the first season of Alex Rider.

Still reeling from the revelation that his uncle was a spy for the British Government, Alex is kidnapped and interrogated by an unknown group of paramilitary agents. It will take all his hidden skills to turn the tables on his captors.

Alex is told the details surrounding Ian's death by Alan Blunt and Mrs. Jones. While waiting for information on his task, he decides to return to school where he is called out of class to speak to a counselor. The counsellor actually claims to be Geoffrey Daniels from the Foreign & Commonwealth Office trying to get Alan's subdivision shut down for using a teenager in spy activity. Alex chooses not to provide him with any information, and later makes plans to hang out with Tom. On his way home, Alex is run down by a van who kidnaps him and takes him to a remote location. Tom, worried that Alex did not show up, calls Jack who is equally as worried. Alex finds himself in a room where he is interrogated by a man who calls himself Wolf, who asks about Ian Rider and Point Blanc. Alex refuses to talk, and is placed in a room with loud rock music in order to torture him. Jack hacks into Alex's laptop to find out where he might be, and finds a video that Alex previously took of the group around Ian's car. Alex is interrogated again, and Wolf threatens to harm Jack and Tom. Alex sneakily steals a paper clip from a document of Jack, and is again placed in a room where water drips on him. Wolf's team is unsure about the interrogation of a teenager, and the operation is called off. Upon turning off the water, they find Alex has broken out of his handcuffs and escaped. Alex doesn't get too far until he stops a car driven by Geoffrey Daniels, actually named Smithers. He is then surrounded by Wolf's team, only for Mrs. Jones to drive up, where Alex realises this was a test. Mrs. Jones takes Alex home and speaks to Alan regarding the methods of Alex's training. Martin Wilby meets with Yassen and tells him that MI6 has no idea Ian's death was a double agent job and that they seemingly have no idea around Point Blanc and Yassen's involvement. Alex is then briefed on the mission, that he is to go under the name of "Alex Friend". At Point Blanc Academy, they make preparations to expect one final student. 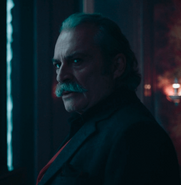