10 miles Off of the Coast of Barbados

Flamingo Bay was the private island that multi-millionaire Nikolei Drevin owned. He and his son, Paul Drevin, often resided there. It appeared only in the novel Ark Angel.[1]

The senior Drevin had a plan to build a space hotel, but when they threw him over budget, he decided to blow the space station out of orbit and crash land it on Washington D.C. When Alex was informed by MI6 that the pieces from the station would harm earth life, Alex set out into space to stop the explosion.

Flamingo Bay was the base of launches and operations for the building of the orbiting hotel.[1] It's wildlife is extremley limited due to the near constant rocket launches which kill off the plants and animals.[1][2]

The island is located ten miles off of Barbados in the Caribbean.[2] 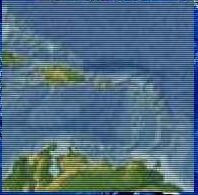