Farrant is from London, born in Hammersmith and raised in Tooting.

At 11 years of age, Farrant began performing on stage in productions at the Young Vic, the National Theatre and Shakespeare's Globe theatre. In 2010, he made his big screen debut as Young Perseus in Clash of the Titans . In 2013, Farrant starred as Thomas Grey for 5 episodes of BBC historical drama The White Queen . In 2016, he played Petya Rostov in the BBC historical Russian based drama serial War & Peace, then as Nigel Wilson in the 2018 BBC miniseries Mrs. Wilson.

In 2019, Farrant landed the leading role in Amazon Prime Video's Alex Rider, a television adaptation of Anthony Horowitz's novel series, where a teenage schoolboy gets recruited by MI6. Farrant stars alongside Vicky McClure and Stephen Dillane. 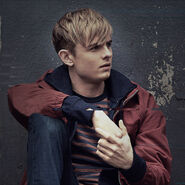